MENA & CO. Law Office practices torts, including bodily harm and property damage, labor laws, class actions, public-administrative law, civil law, and litigation, with an emphasis on group tort claims. The firm was founded in 1993 by the former Knesset member Adv. David Mena, after years of public activities and serving in senior public positions in service of the state.

The firm is constantly evolving, and its numerous achievements, including high-sum compensations, led to its excellent reputation, as the majority of Israel’s large tort lawsuits are managed through it, as the attorney of the plaintiffs. The firm espouses professional excellence, personal service and attention for its clients, with thorough handling of solutions for any legal problem.

Over the years, the firm handled complex legal cases that received extensive media attention, including torts for the abuse of asylum-dwellers of “Neve Ya’akov” in Petach Tikva, tort claims for the Carmel Fire, a class action on the grounds of the pollution of the sea and the Yarkon River, class actions against BAZAN Group and Dor Chemicals Ltd. on the grounds of the pollution of Haifa Bay, a tort claim on behalf of business owners in Ramat HaHayal due to the collapse of the parking garage in HaBarzel Street, a negligence claim due to the drowning of 3 boys in the Sea of Galilee and an abuse claim against abusers of senior citizens in Haifa and Rehovot.

The firm regularly serves as a legal counselor for leading Israeli companies and organizations.

Inter alia, Adv. David Mena served for 8 years as the General Counsel of the “Representative Organization of Hostilities Casualties”, an organization that represents the families of victims of hostilities since the establishment of the state. Adv. Haya Mena combines her legal work with extensive social-public activity and is a member of Ramat Gan’s City Council.

Torts - The firm handles bodily harm, property damage, car accidents, medical malpractice, and environmental damages. The firm specializes in group tort claims and represents plaintiffs in most of the tort claims that occurred in Israel in recent years.

Labor Law - The firm provides legal support and counsel in all aspects of labor law and employee protection, including termination claims, reviewing post-employment/retirement rights, filing claims and representation before the labor court, social rights and workplace conditions, with a particular specialization in hostilities victims.

Administrative Law - The firm handles legal topics that relate to the Citizenship and the Law of Return, concerning Israeli citizenship and status, local authorities issues, Bagatz appeals on a wide variety of public-administrative topics and representation of companies and individuals before the administrative court.

Litigation and Quasi-Judicial Entities - The firm represents its clients in all tribunals including Bagatz, labor, and administrative courts, and also in arbitrations, medical committees and appeal committees of Bituach Leumi.

Class Actions - The firm files class actions on a variety of topics, including public, commercial, labor, torts, and environmental claims.

Inter alia, the firm filed tort claims on behalf of business owners in Ramat HaHayal against Danya Cebus Inc., on the grounds of the collapse of a parking garage in HaBarzel Street, claims against the “Neot Kipat HaZahv” senior-citizen home on the grounds of abuse of helpless elderly people, a claim due to the explosion of gas tanks that led to the death of a husband and wife, and a claim against the Separation Administration due to discrimination in the compensations to the evacuees.

In 2004-2005 the firm represented a large group of businesses and fishermen and filed on their behalf tort claims against the Dan Sewage Union, on the grounds of sewage discharge into the sea, which harmed their livelihood.

In 2006, 2013 and 2020, the firm represented hundreds of residents of Southern Tel Aviv, whose houses were damaged from floods that resulted from a lack of proper infrastructures in their neighborhoods. Following the firm’s intervention, the residents received monetary compensations from the Tel Aviv Municipality for the damages. The firm is a leader in the field of floods claims and recently filed claims against the cities of Ashkelon, Rishon Lezion and Hod HaSharon due to flood damages. In 2007, the firm filed, on behalf of hundreds of residents of Southern Tel Aviv whose apartments are adjacent to the Ayalon Highways, a claim against Ayalon Highways Inc. and the Tel Aviv Municipality, due to damages that were caused to their houses during the paving of the highway. The firm also filed a claim for dozens of residents of southern Tel Aviv against Israel Railways Ltd., over noise damages caused by the train that was built close to their homes.In 2007 the firm filed a claim against the Dan Sewage Treatment Facilities due to sewage pollution in Tel-Aviv’s beaches. In 2007, the firm filed an appeal to Bagatz requesting to order to Minister of Internal Affairs to provide Israeli citizenship to the basketball player Cory Carr. From 2009 until today, the firm filed about 25 claims on the grounds of Ficus tree roots damage to houses in South Tel Aviv. In 2012, the firm filed a claim on behalf of 70 plaintiffs due to the damages of the Great Carmel Fire. In 2017, the firm filed tort claims for the families of deceased nursing tenants, who died due to negligence during the Covid-19 pandemic.

Adv. David Mena - Adv. Mena has a B.A., Diplomacy and Criminology from Bar-Ilan University, an LL.B. from Tel Aviv University, an M.A., Public Administration from Bar-Ilan University and Welfare Services Administration diploma from Brandeis University in Boston in the framework of a scholarship of the US government on which the President of the US, Jimmy Carter, is signed. Adv. Mena served as a member of the Ramat Gan Municipality, Board Member of the Broadcasting Authority, VP of the National Insurance Institute, CEO of the Employment Administration and member of the 13th and 16th Knesset terms, and also headed the Parliamentary Committee of Inquiry for the Bedouin Segment in Israel.

Adv. Haya Mena - Adv. Mena Has an LL.B. (with honors) from the “Academic Center for Business and Law” and LL.M. studies in commercial law in Tel Aviv University, in cooperation with UC Berkeley. She served as a legal assistant for magistrate judges in Tel-Aviv. She serves as a director in “Hachsharat HaYishuv” and General Counsel of the “Yanshufim” association that works to diminish gaps in education in Israel. Adv. Mena serves as V. Chairperson of the Tel-Aviv District, Chairperson of the Ramat Gan Contact Committee and V. Chairperson of the Ethics Committee of the Israeli Bar Association. She also serves as Chairperson of the Women Forum of Lahav – the chamber of independent professionals and businesses in Israel and as a member of Ramat Gan’s City Council. Her pro bono work includes cases where she provides legal counsel on administrative status arrangement. 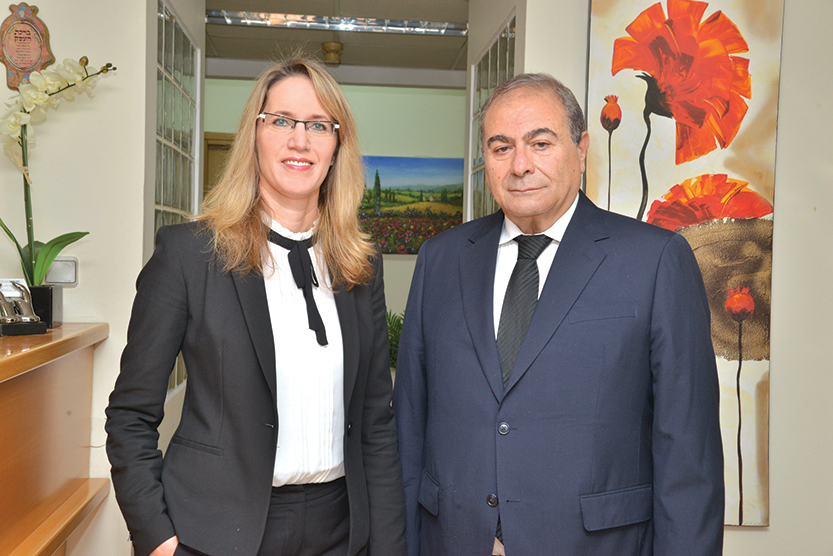