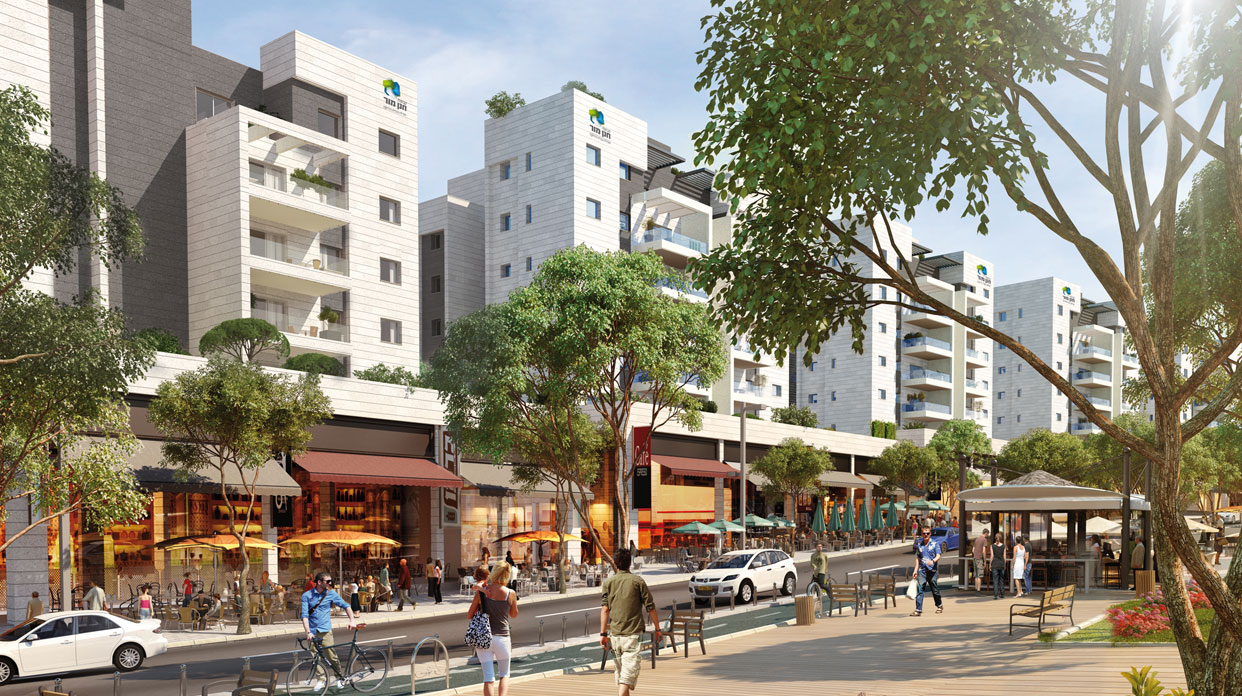 More Group was founded in 2004 by the two entrepreneurs Hanan More and Avi Maor, and since 2006 it has been publicly traded on the TASE. The group develops and builds residential and yielding properties in Israel and abroad and is one of Israel’s largest properties development and construction groups.

The group initiates and builds thousands of apartments across Israel and receives financial support from leading financiers. More Group developed a unique methodology, “The More-Insight”, which it utilizes for developing and differentiating the projects that it initiates. The methodologies study the future needs of the family in depth and devises a residential complex which is based on the way the family perceives “The Daily Lives of Tomorrow”: an entire living environment which enables a life that integrates residence, commerce, leisure and employment, very close to the homes.

In order to guarantee its compliance with the schedules, all of the group’s projects are built by its subsidiary More Construction or alternatively by Israel’s leading execution companies, such as Tidhar Group. Currently, the company is promoting 10 residential projects with a total of 3,141 apartments in planning and execution and also 11 yielding properties projects.

Hanan More, Group Chairperson and Founder: Hanan (Major (res.)) is a real estate entrepreneur with longstanding experience and knowledge in the initiation, planning and execution of projects in Israel and abroad. Before establishing the company, he served as an attack helicopter pilot in the IAF and by education he has an LL.B.

Avi Maor, Group CEO: Avi has vast knowledge and about 20 years of experience in the fields of management, marketing, and projects organization in Israel and abroad.

Over the past few years, More Group has been in an accelerated development momentum which includes, in addition to the projects that it is already building, winning several prominent real estate public tenders. These include, in the year of 2021, the following: winning “Plot 107” in the Sdeh Dov Tender, winning the Ramat Gan Tender “Rental Apartments” together with “Harel Insurance Company” and starting a cooperation in the field of rental residences, winning the “Subsidized Price” Ramat Gan Tender, winning the “Subsidized Price” Beer Yaacov Tender, receiving an approval for the marketing of 434 Mehir LaMishtaken (government price-capped) apartments in the Or Yam project and also extending the B.O.T. agreement for operating the Harish Mall by another 7 years.

The Group’s Areas of Operations

More Residential: The group’s residential arm is currently promoting and building 1,316 residential apartments in high-demand areas: Modi’in, Rishon LeZion and Or Tam, and another approx. 1,825 apartments in the following locations: on the most sought-after location in Tel Aviv – Sdeh Dov (plot 107), Haifa Entrance and Harish, alongside two subsidized price projects in Ramat Gan and Be’er Yaacov. The “Daily Lives of Tomorrow” methodology that the group developed characterizes it in every residential project that it builds. It is one of the company’s representative features and it emphasizes the out-of-the-box concept and thinking, as a preliminary recognition of a new trend in the field of future residences and it expresses the company’s concept of building a complete life environment for families.

More Rental: Over the past year, More Group built a partnership with Harel Insurance Company in the rental properties field, and a first project that the Group won, with a scale of 247 apartments in Ramat Gan, would be held jointly as a rental properties project. The rental properties are an important pillar of the group’s strategy and its continued growth.

More Yielding Properties: The company’s strategy focuses on properties within the urban texture, including neighborhood commercial centers and open areas in central streets which are oriented towards fulfilling day-to-day needs. The group holds More Mall in Harish which combines an open commercial center with a closed shopping mall on an area of about 10,000 sq.m. The mall’s stores mix includes, among other: A Shufersal flagship supermarket, stores of Fox Group (Fox Home, Fox), Super-Pharm and a dining and leisure area with branches from leading chains, such as McDonald’s, Golda Ice Cream and Yayin Bair. In addition, the group holds another 2 commerce complexes in Harish – More in the City and More Street, and also commerce avenues in Modi’in, Rishon LeZion, Or Yam, Sdeh Dov Tel Aviv and Ramat Gan, with a scope of 40,000 sq.m.

More Properties Initiation and Redevelopment: Over the past few years, the group started offering a new service for the development and redevelopment of real estate. In the framework of this service, the group contracts with private landowners that have the potential of being rezoned to residential construction at the edges of cities.

Sdeh Dov, Phase A: building a luxury residences tower at the first line to the sea in North Tel Aviv, with about 455 apartments. This ultra-luxury project would be built near parks that cover dozens of dunams and would be built inside a private complex far from the transportation arteries, with subterranean parking garages and an open sea view on its western front. The project has a diverse apartment mix and would also include a boutique hotel with 80 rooms and commerce areas.

Carmal Slopes, Haifa: a mega-project where the company would build 839 apartments, 498 in the framework of Mehir LaMishtaken programs and 341 free-market apartments. The project would be built in Haifa Slopes, a sought-after neighborhood between Mt. Carmel and the beach which is characterized by an urban area with peaceful complexes, proximity to the Hi-Tech R&D centers and employment areas, proximity to 2 leading shopping malls and a few minutes’ drive from the promenade and the bathing beaches.

Ramat Gan, Rental Apartments: A rental apartments project in southern Tel HaShomer that would include three 15-storey towers with a total of 247 apartments. The project is built in the framework of a cooperation with “Harel Insurance Co.” (40%) in the rental properties segment, and other projects are expected to join it in the future.