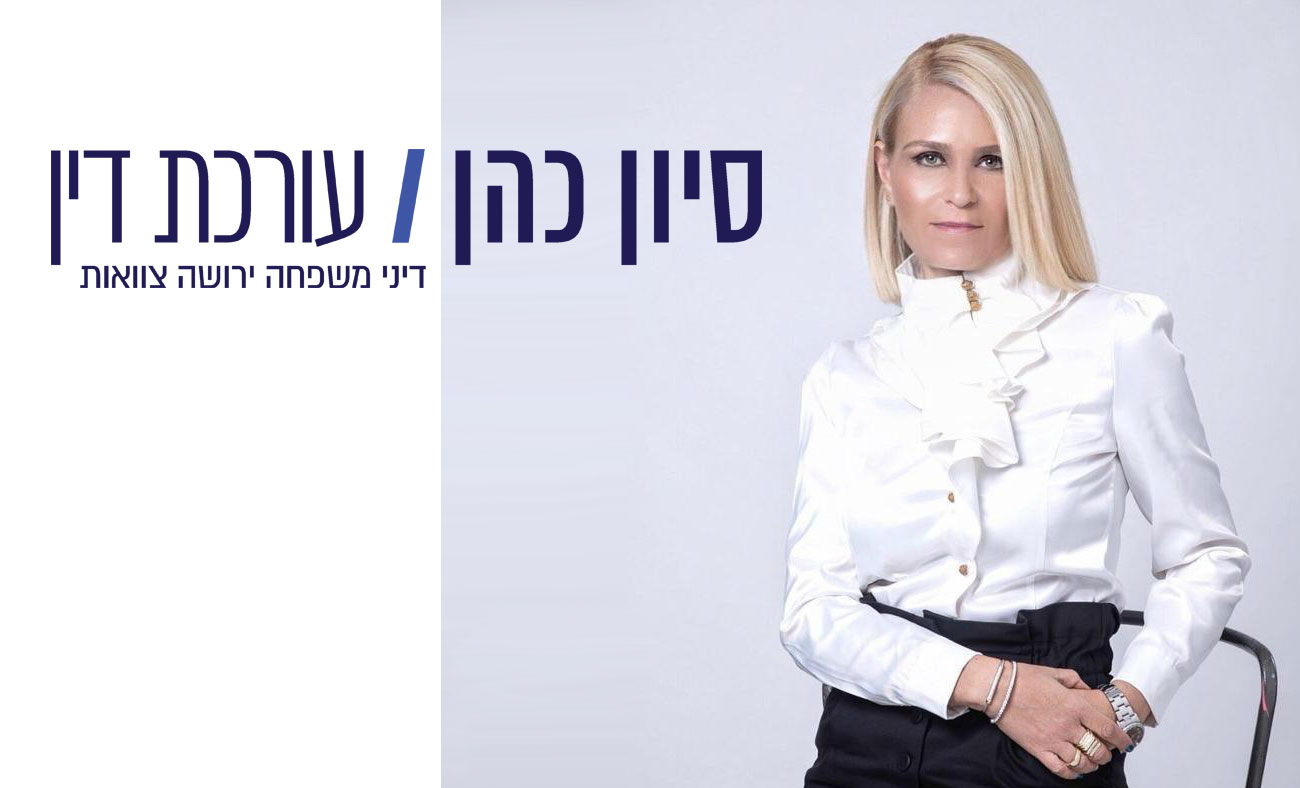 Sivan Cohen, Law Office is a leading marital status and inheritance boutique firm which was founded in 2008.
The firm practices family and inheritance law, including divorce agreements, custody claims, domestic violence, child support and alimony, Ktubas, paternity proofs, will preparation and objection, guardianships, common law spouses, gay families, marital harmony, division of assets, receiverships, real estate, joint parenting, heir agreements, lasting power of attorney and more.
The firm is headed by Adv. Sivan Cohen, a highly experienced lawyer with about 15 years of extensive experience, who accompanies and supervises all of the cases that the firm handles. Over its years of practice, the firm has managed to position itself as a firm which aims to solve divorce, inheritance and estate cases through mediations that benefit all of the parties.
However, in cases where a mediation settlement can’t be reached, the firm works very professionally and utilizes its vast legal proficient and its litigation and cross-examination to achieve legal victories for its clients.

Adv. Cohen, the firm’s founder, has an LL.B. (cum laude) from the Academic Program of the College of Management and an LL.M. from Tel Aviv University. She has a certified mediator diploma from “Amot Gishur” – TAU’s Dispute Resolution Center, and is a great believer in solving disputes through dialogue and peacefully.
She interned under Judge (ret.) Hanna Rish-Rothschild in the Ramat Gan Family Court. After her admittance to the Bar in 2005, she worked as an associate in leading family law firms and was responsible for prominent and significant cases.
Adv. Cohen practiced civil status throughout her entire professional career, believing that a good lawyer must specialize in a single practice area and master it for the benefit of his/her clients.

The firm has unique expertise in representing plaintiffs and defendants from the LGBT community and it specializes in formulating parenting agreements between same-sex spouses, adoption and separations.
Adv. Cohen has been accompanying numerous new family cases including cases that include joint parenting agreements, nuptial agreements, common law spouses agreements, relationship agreements, surrogacy and more.

The firm is defined as a boutique firm, and accordingly, Adv. Sivan Cohen personally counsels her clients and accompanies them through their crisis, serving as a sympathetic ear for them throughout the entire process.
In each case she accompanies, Adv. Cohen studies the case to its minutest details, in order to gain the broadest perspective, and she calculates her steps throughout the entire process with full transparency for the clients, in order to reach the best legal achievements for them.

The firm accepts clients who arrive to it voluntarily for mediation and also accompanies clients who were ordered by the court to execute an external mediation proceeding. In all of the agreements, whether mediated or through legal proceedings that culminated in an agreement, the firm very carefully looks ahead and formulates very detailed agreements that cover every possible future scenario. As a strategic principle, the firm prefers to reach agreements and compromises in the cases it handles, but if, despite the goodwill it seems that there is no partner for an agreement the other party remains fortified in their position, the firm fights for a victory of his clients while reaching very impressive legal achievements.

In light of Adv. Sivan Cohen’s extensive experience and the fact that she lives and breathes the civil status field and constantly remains abreast of new rulings and guidelines, the firm manages to solve complex issues through creativity and out-of-the-box thinking.

A Parental Order Years After Birth: Over the past three years, the firm has been handling a case where two homosexual men who lived together for a decade brought a child into this world through surrogacy. For their own reason, the couple never signed a parental order arrangement before the adoption, and when the child was 3.5 years old they broke up, while the biological father completely isolates the child from his ex-spouse. The firm has been accompanying the spouse who was isolated, and as a result of the firm’s legal actions, the father received an approval to see his daughter gradually and he currently has a visiting arrangement of several hours once a week after her school hours. The principle question that was discussed in this case was whether a parental order may be issued when the biological father opposes and the order wasn’t provided near birth. The firm precedentially managed to convince Child Support Services of its position, and a ruling is awaited.

The firm represented a divorced father who filed a child support reduction claim due to a change in his personal circumstances. In most cases, the reduced child support applies from the day of the ruling, and in this case the client received a retroactive (1.5 years back) reduction, in light of the fact that the firm asked to deposit a certain sum with the court, in order to prevent future claims of the consumption of the funds.

Requiring a Men to Pay his Ex Housing Expenses for Life

The firm handled a case where two unmarried spouses signed a joint living agreement, which included a provision where if the man would ever sell their apartment or evict the woman he would have to pay her housing (rent) for the rest of her life. The agreement wasn’t ratified in court and when the couple separated, she turned to the firm, which filed a lawsuit. The court upheld the case’s claims and ruled in favor of the woman so that the man was required, precedentially, to pay her housing expenses for the rest of her life.