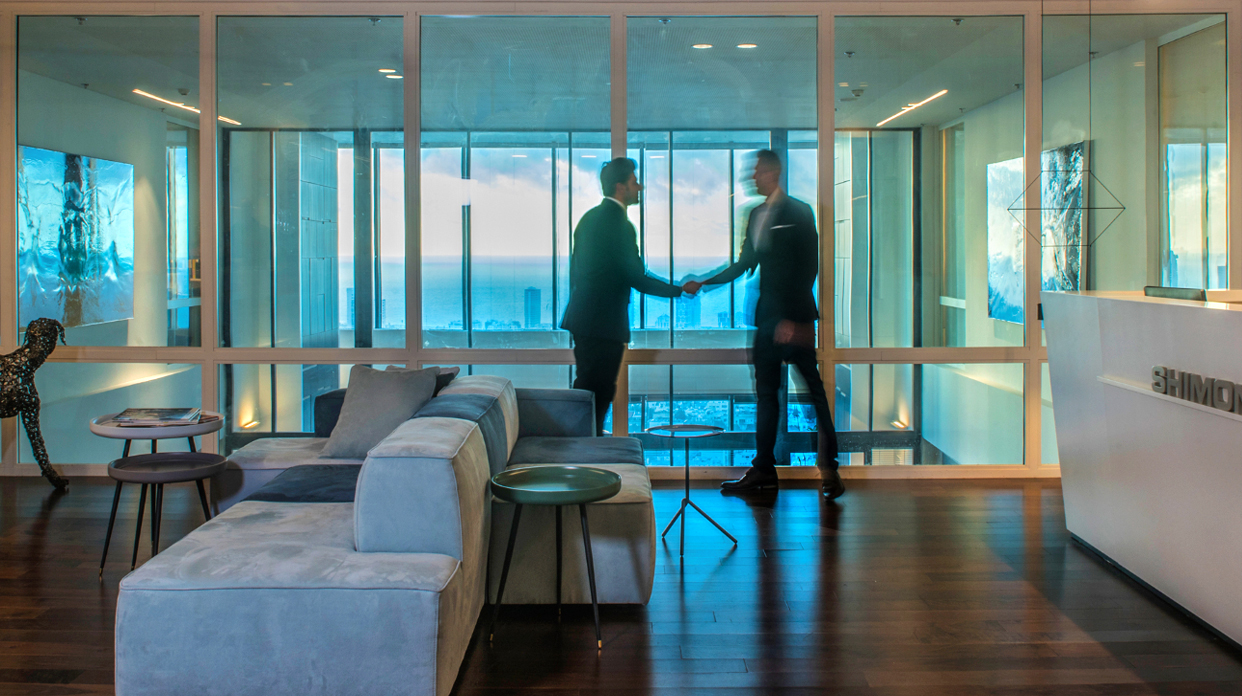 Shimonov & Co. is a leader in the practice of securities law in Israel, being the most active law firm in the field of capital market and securities, and widely regarded as one of the finest boutique firms in the country. The firm represents many dozens of public companies, including some of Israel’s most prominent and important companies, and some of the largest real estate companies in North America, which securities are traded on the TASE.

The firm was founded in 1993 by Adv. Israel Shimonov, a leading expert in capital markets and securities law. The firm supports its clients with the full range of legal services that are provided for public companies and companies going public, including prospectuses and public offerings, mergers and acquisitions, securities law and corporate law.

The firm’s team has unique expertise in representing foreign corporations seeking to offer securities to the public in Israel, focusing on North American companies. The firm earned an international reputation in the field securities and has been involved in most of the security offerings by American companies to the Israeli public.

Shimonov & Co. is consistently ranked in the Top Tier of law firms for capital markets and securities law, both by local and international legal guides, including references to the firm’s pivotal role in hundreds of prospectuses and public offerings in Israel, having represented clients in the most significant and complex transactions in Israel in recent years.

Prospectuses and Public Offerings
The firm’s team has supported hundreds of IPOs and secondary market offerings securities market of Israel, as well as hundreds of private placements valued at more than a hundred billion shekels overall.
Shimonov & Co. boasts the largest number of facilitated public offerings on the Tel Aviv Stock Exchange, including the IPO of Fattal Group, the largest Issuance in Israel in recent years.

Unique Expertise Representing Foreign Companies in Israel
Shimonov & Co. brings to bear unique expertise in representing foreign companies seeking to offer securities to the public in Israel and U.S. based real estate companies that issued bonds in Israel.
The firm has an experienced, professional and dedicated team of lawyers who handle only this practice area. The firm has been representing the vast majority of large real estate corporations from the U.S. and renown owners of controlling interests who are included in Forbes’ World Billionaires List.
In 2019, the firm’s team facilitated the proceeding for the drafting of a unique, trailblazing and first-of-its-kind (in the Israeli capital market) IPO prospectus, where for the first time an American REIT (in an UPREIT format) was brought to the TASE to offer shares only to the Israeli public.

Ongoing Counsel for Public Companies
Shimonov & Co. provides ongoing counsel to some of the most important publicly held companies in Israel with respect to their activities and obligations as reporting corporations.
The firm’s impressive portfolio of clients, coupled with long-term representation, enables the firm to acquire profound knowledge with respect to the legal needs of such companies.
This complex counsel includes assistance in preparing immediate reports, reports on transactions with the controlling shareholders and private placements, assistance in drafting annual reports (Barnea), along with participation at meetings of the companies’ institutions (board and committees).
The firm’s team also assists clients with the preparation of legal opinions, applications to the Israel Securities Authority, matters related to compensation policy and capital market aspects of employee stock option plans.

Mergers and Acquisitions (M&A)
The firm’s team handles M&A transactions, with an emphasis on public companies - a complex field that requires in-depth understanding and proficiency both in corporate law and in securities law.
Throughout the years, the firm’s has handled hundreds of mergers and acquisitions of public companies in Israel, dozens of tender offers and numerous complex reorganization processes, such as spinoffs, stock dividends and similar actions resulting from the Concentration Law for reducing layers.
In recent years, our firm’s team has even facilitated some of the central acquisition transactions in the Israeli capital market, including the representation of the buyer in the mega-transaction for acquiring control in Shikun & Binui.
Adv. Israel Shimonov, the firm’s founder, is personally involved and leads the handling of every material transaction. His unique and longstanding experience of more that 3 decades in the securities field and his absolute proficiency in every aspect and derivative of the Israeli capital market create a winning formula for leading complex cases.

Capital Market Regulation
In light of its uncompromising professionalism and its massive practice in the field of Israel’s capital market and securities, the firm’s team has become an authority also in the area of capital market regulation in Israel. The firm is frequently called upon by clients who are not among the firm’s regular clients. The firm has a professional department headed by a senior associate who also holds a degree in accounting. The department is responsible, among other things, for preparing legal opinions and analyzing special cases. The department is also involved in legislative amendments in the field, including changes to the guidelines of the Tel Aviv Stock Exchange on issues at the core of the firm’s activities.

The firm’s clients include many dozens of public companies having listed securities on the Tel Aviv Stock Exchange. Our clients include leading Israeli conglomerates, foreign companies that are leaders in their field, and numerous businesspeople and stakeholders from Israel and around the world. Moreover, the firm’s team accompanies corporations from diverse fields, such as domestic and international real estate, hospitality, industry, aviation, medical devices, retail, food and beverage, fuel and oil, investments and finance, biomed, high-tech, venture capital, automotive, and leasing.

Shimonov & Co. boasts a skilled, high-quality and experienced legal team, providing clients with the highest level of professional service. The firm wisely integrates uncompromising quality with exceptional creative thinking, and strong business acumen. Most of the firm’s associates and partners started out as interns at the firm, and have been solely practicing capital market and securities issues for many years, while accumulating invaluable organizational experience.

Adv. Israel Shimonov, the firm’s founder, is one of the foremost lawyers in Israel in the field of capital markets, with more than three decades of experience in commercial law, and is recognized as a leader in his field by both colleagues and various entities and by Israeli and international legal guides. Drawing on the extensive experience and unique knowledge that he gained over many years of legal practice, Adv. Shimonov is considered an authority in his field and is respected and held in high esteem within his practice area and in general.
Adv. Shimonov, a renowned expert in his field, advises his clients on a wide range of matters in corporate and securities law and represents them before the Israel Securities Authority and the Tel Aviv Stock Exchange. Over the years, Adv. Shimonov has represented a large variety of clients in hundreds of public offerings and hundreds of capital investment and private placement transactions in the private and institutional markets, with an overall value of tens of billions of shekels. Additionally, throughout his career, Adv. Shimonov has played a role in numerous precedent-setting cases and ground-breaking transactions in the Israeli capital market, such as extremely intricate M&A transactions involving publicly held companies and has also acted on the most significant power struggles in the Israeli capital market in the last two decades.

Adv. Dudi Berland is a senior partner at the firm and manages the field of foreign offering issuances together with Adv. Benjamin Ben Zimra, partner at the firm. Over the years, Adv. Berland has accrued extensive experience leading IPO’s and various transactions on the Israeli Market, dealing with the Israel Securities Authority, the Tel Aviv Stock Exchange and other Israeli institutions. In addition, Adv. Berland provides ongoing legal counsel to corporations on a wide range of matters related to Corporate Law and Securi-ties Law and other issues.

Adv. Nir Cohen Sasson is a senior partner at the firm, expertise in Corporate Law and Securities Law in Israel, as well as mergers and acquisitions of companies that are publicly traded on the Tel Aviv Stock Exchange. Adv. Cohen Sasson counsels publicly- and privately-owned companies regarding IPOs and raising funds on the secondary market. Adv. Cohen Sasson also provides counsel to corporations traded on the TASE on a range of legal and commercial matters related to their daily commercial activities and complex processes in the Israeli securities market. Adv. Cohen Sasson represents publicly-traded com-panies active in a wide variety of fields, as well as foreign companies raising funds in Israel, including complex debt raisings.