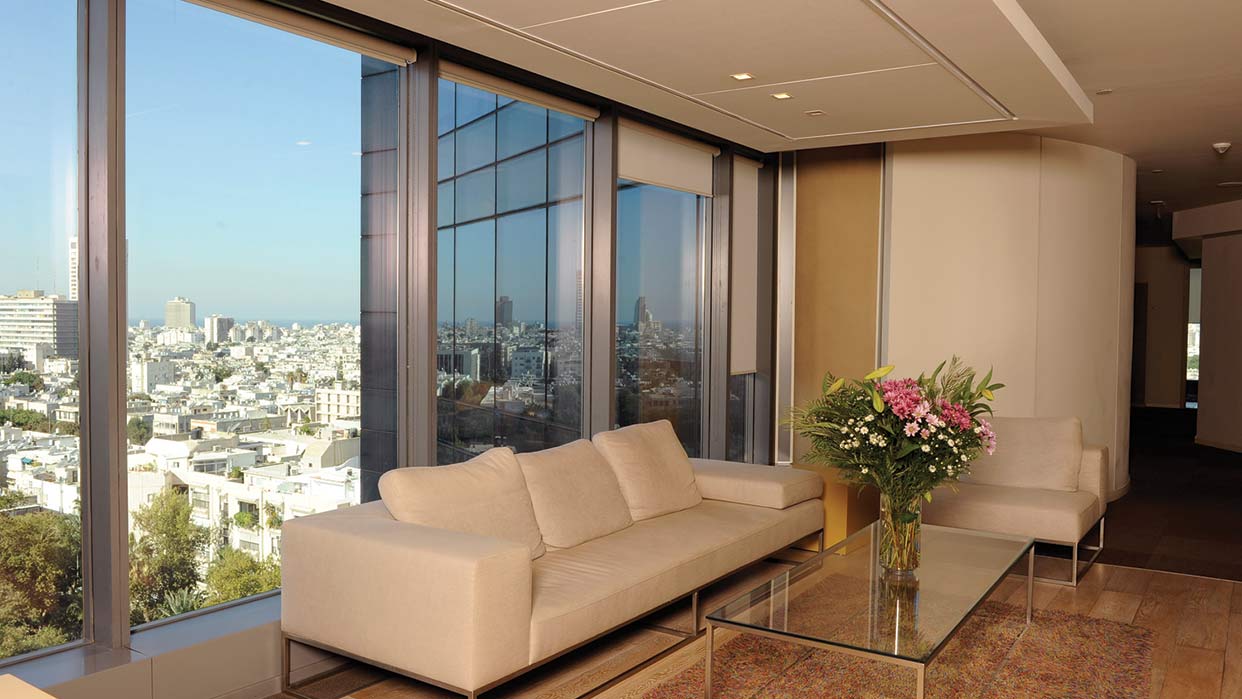 Ben Zur, Corb & Co. is one of the most prominent litigation firms in Israel. The firm, a boutique firm founded by Adv. Boaz Ben-Zur, merged in 2021 with Adv. Uri Corb’s firm. The firm specializes in litigation in a variety of fields of the law: civil-commercial, white-collar, securities, insurance, class actions, banking, public law, labor law and libel. The firm represents leading companies in high quality, large and extremely complex cases, and has an exceptional professional reputation in accompanying and representing its clients. The firm deals with litigation in all courts, as well as mediation, arbitration, representation before commissions of inquiry, as well as disciplinary courts.

The firm’s specialty and uniqueness are in managing cases of high complexity and exceptional scope, uncompromising struggle to achieve its goals, and representation of the client out of deep understanding of their needs. The firm manages its clients’ cases with a professional application of interdisciplinary aspects, along with extensive research, meticulous attention to details, creativity and initiative, while maintaining both high standards on the legal side and fluent writing. The firm’s cases are managed with strategic and legal thinking by a team of multiple attorneys per case. Adv. Ben-Zur and Adv. Corb lead the teams and are involved in the management of the cases, while focusing on personal service for the client.

Among the Firm’s Clients

Many clients from the top of the business and economic sectors in Israel, including public companies, large insurance companies, pension funds, workers unions, companies in the fields of fuel, real estate, infrastructure and tourism, private businessmen, capital market investors, large insurance agencies, public figures, ministers and MKs, well-known members of the media as well as dozens of lawyers and accountants.

Complex Commercial Litigation – The firm handles complex lawsuits and arbitration proceedings dealing with business and commercial disputes, power struggles over companies, disputes between shareholders and partners, and investor claims in the capital market. The firm also represents defendants in derivative claims on behalf of shareholders, complex real estate disputes, claims related to the banking and insurance sectors, and dissolutions of partnerships of lawyers and accountants.

White Collar – The firm represents senior defendants, public figures, managers in the public sector and businessmen in white collar cases, from accompanying the client at the investigation procedure and hearing stages to managing the case and achieving precedent setting results. Additionally, the firm has unique experience in appearing before commissions of inquiry and representation in classified homeland security cases.

Insurance Litigation – Adv. Ben-Zur has a unique knowledge of the insurance sector, as he was an active partner in the formulation of regulatory arrangements in the pension field. Most of the leading insurance companies are represented by the firm in complex commercial disputes, large-scale arbitrations and class actions, as well as representation in regulatory affairs connected to the Ministry of Finance. The firm also represents large insurance agencies.

Public Law Litigation – The firm represents various entities in a variety of proceedings in the field of public law before the High Court of Justice, in administrative partitions and public struggles, as well as in proceedings conducted by the State Comptroller’s office. Another unique public area in which the firm specializes is Election Law and Party Law and accompanying senior politicians in election procedures.

Litigation in the Field of Labor and Employment Law – Representation of leading workers unions before various courts, including collective disputes in the field of pensions and social benefits. The firm also represents employees and employers in hearings and lawsuits over labor relations in the Labor court, as well as disciplinary proceedings of civil servants before the Civil Service Commission.

The firm voluntarily represents the Kav La’Oved association and the Freedom of Information Movement. The firm is also a member of the National Public Defender’s Forum for False Convictions.

Adv. Boaz Ben-Zur – With over 30 years of experience, he is considered one of the leading and most respected litigators in Israel and is consistently ranked at the top of the professional rankings. He graduated with honors from Tel Aviv University’s Faculty of Law and holds a master’s degree in Law as well. He began his career as a lawyer in the S. Horowitz firm in 1987. He then joined Dr. Weinroth & Co., where he was a partner from 1990 for 15 years. In 2005 he founded Boaz Ben-Zur & Co.

Adv. Uri Corb – Adv. Corb has more than 20 years of experience as a senior director at the Jerusalem District Attorney’s Office, in which he represented the state in hundreds of criminal proceedings, as well as administrative and civil proceedings. As a prosecutor, Adv. Corb oversaw significant cases, in-cluding the trial of former Prime Minister Mr. Ehud Olmert and the trial of the murderers of the boy Muhammad Abu-Khdir. After several years in the private sector, including time served as a partner at Tulchinsky Stern Cohen Levitski & Co., Adv. Corb joined the firm as a managing partner in 2021, along-side Adv. Boaz Ben-Zur. Adv. Corb has expertise in white collar offenses, financial offenses (including taxes and money laundering) and in managing forfeiture proceedings.

Adv. Hagai Halevy – Adv. Halevy graduated from Bar-Ilan University’s Faculty of Law and interned in the Supreme Court with the Honorable Justice (ret.) Theodore Orr. He then worked as lawyer at S. Horowitz, was a partner in the law firm Ze’ev Scharf, and since 2005 serves as a partner at Ben Zur Corb & Co.

Adv. Dikla Sirkis – Adv. Sirkis holds a bachelor’s degree from the Faculty of Law of the Hebrew University in Jerusalem and a master’s degree from Tel Aviv University’s Faculty of Law. She interned at the State Attorney’s Office’s Criminal Department and worked as a lawyer at Dr. Weinroth & Co., from where she continued to Spigelman Koren Zamir & Co. She joined the firm in 2011. Adv. Sirkis specializes in complex civil and commercial litigation and white-collar offenses.

Adv. Assaf Benmelech – Adv. Benmelech specializes in litigation in a variety of legal areas, including commercial litigation that includes high-tech, Environmental Law, white-collar, and sensitive issues related to family capital and property as well as class and derivative litigation. Adv. Benmelech began his career as an intern at State Attorney Edna Arbel’s office. In 2003 he joined Tulchinsky Stern Cohen Levitski & Co. Since 2010 he serves as a partner in the litigation department at the firm’s Jerusalem branch.

Adv. Elad Peleg – Adv. Peleg is a graduate of the Hebrew University of Jerusalem and interned at Meitar Law Offices. He worked at Gilat Knoller Graus & Co. and joined the firm in 2008. He specializes in commercial litigation with an emphasis on representing defendants in class actions, primarily large insurance companies.

Adv. Tomer Shikarchy – Graduate of Tel Aviv University with bachelor’s degree in law and economics, Adv. Shikarchy interned at Chet-Doron Law Office, worked as a lawyer at Dr. Yossi Segev Law Office and joined the firm in 2012. He specializes in complex commercial litigation and large-scale arbitration.

Adv. Avraham Avrahamof – Adv. Avrahamof graduates from the Faculty of Law of the College of Management. He started his career as an intern at the firm and since 2010 as a lawyer. He specializes in commercial litigation and handles a variety of complex cases.

Adv. Sivan Russo – Adv. Russo served as an attorney for 12 years, primarily in the State Attorneys Office’s Criminal Department. She represented the state before the Supreme Court in appeals in serious crime cases, in appeal proceedings and in requests for retrials. Adv. Russo took part in teams dealing with the issue of prosecution in sensitive and complex cases. Upon moving to the private sector, she began representing in criminal proceedings, mainly white-collar offenses and complex civil proceedings, and in the beginning of 2021, she joined the firm’s litigation department.

Adv. Ori Shneller – A College of Management’s Faculty of Law graduate, Adv. Shneller also holds a bachelor’s degree in economics (with specialization in finance) from the College of Management. He began his career as an intern at the firm and continued as a lawyer since 2013. He specializes in commercial-civil litigation in large-scale cases.

Adv. Carmel Ben Zur – Holds a bachelor’s and master’s degree in commercial law from Tel Aviv University’s Faculty of Law. She interned at the Supreme Court with the Honorable Justice Uzi Vogelman and later served as a legal assistant from2012-2017. She joined the firm in 2017. Specializes in civil and commercial litigation, Administrative Law, and white-collar cases.

Adv. Guy Raveh – Adv. Raveh holds a bachelor’s degree in law (with specialization in government) from the IDC Herzliya. He interned at the Supreme Court with Honorable Justice (ret.) Salim Jubran. He joined the firm as a lawyer in 2014. Specializes in administrative and commercial litigation in large-scale cases.

Adv. Inbal Borosh – Holds a bachelor’s and master’s degree in law (law and technology) and a master’s degree in international relations from the Haifa University. Interned at S. Horowitz & Co. and worked as an attorney at Fischer Behar Chen Well Orion & Co. and at Nir Cohen Leshem Law Office. She joined the firm in 2018. Specializes in diverse commercial-civil litigation in several areas as well as class and derivative claims.

Adv. Idan Seger – Holds a degree from the Faculty of Law of Tel Aviv University. Interned in the Supreme Court with Honorable Justice Dafna Barak-Erez and in the High Courts Department of the State Attorney’s Office. He joined the firm in 2020. Specializes in Administrative and Constitutional Law, civil litigation, and white-collar cases.

Adv. Hadar Goldstein – Holds a bachelor’s degree in law and government from the IDC Herzliya. Started as an intern at the firm and later joined as a lawyer in 2021. Specializes in diverse commercial-civil litigation in large-scale cases.

Adv. Ohad Weigler – Holds a bachelor’s degree in law from the Hebrew University (2019) in Jerusalem. Interned in the High Courts Department of the State Attorney’s Office. Specializes in white-collar offenses, commercial litigation and Public Law.

Adv. Rotem Donowicz – Holds a bachelor’s degree in law from Haifa University (2019). Interned in the Supreme Court with the Honorable Justice D. Mintz. Specializes in commercial litigation and white-collar.