Gez Sassy Law Office is one of the most famous and senior law firms in Israel in criminal law. The firm was founded by Gez Sassy in 1981 and has since represented thousands of those accused of the gravest criminal offenses – murder, sexual crimes, drug trafficking, bribery, white collar crimes, money laundering, and more.

The firm represents its clients in all criminal procedures – from initial arrest through to charges, hearings before charges are brought, conducting the trial, parole and release boards and prisoner appeals, the pardoning process and wiping clean a criminal record. The firm also offers expertise in offenses before military courts.

Sassy Gez is one of Israel’s most important and most renowned defense attorneys. He is known by both senior figures in the legal world and by the public at large. He has won great esteem in the criminal legal sector for his representation in Israel’s most significant cases including cases involving the heads of Israel’s criminal families, famous murder cases, and representing public figures, actors and celebrities.

Recently, the firm achieved the impressive acquittal of the ATV driver who ran over Ethiopian runners and deserting them, despite his confession. The firm represented many suspects in the leading criminal affairs of the year, including suspects of the bribery affair in the party “Israel Beitenu”, a suspect of the bribery affair at the IEC, the mayor questioned and suspected of sex offenses and the 512 affair.

In addition, the firm represented Eran David that was charged with the murder of Hili Sobol, his girlfriend’s twin sister, the nanny that was charged with shaking a baby, Eyal Golan’s father, and the media and businessman in the Eyal Golan affair, the Modiin teacher accused of an illegal affair with a 15-year-old school pupil, and Derek Roth’s murderers, Moshe Ben Ivgy who was extradited from Argentina, the Late Hapoel Tel Aviv coach Nitzan Shirazi, who used to train HaPoel Haifa and HaPoel Tel Aviv, in the soccer match-fixing affair; Rabbi Nir Ben Artzi in the abduction affair; Itzik Hadif (Hishi) head of the Pardes Hanna gang, Haim Hajaj (the mastermind), Assi Vakhnin and many more.

The firm represented the serial stalker of Eyal Kitzis and Tali Morino, the woman who claims she was harassed by Meir Shetreet, the businessman in the Ben-Eliezer affair, the teacher Yotam Okon, who was accused of sexual assaults, businessman and model’s agent Shai Avital, and Arie Shif, who shot to death a person who broke into his car and received 9 months of community service, and many more.

The world view of Sassy Gez and the lawyers that he leads rests on the sense that they are fulfilling a major mission. The firm sees its endeavors as one of the foundation stones of Israel’s democracy. The firm’s lawyers fight for the success of each case with uncompromising thoroughness and leading clients through every stage of the case’s conduct.

The firm has notable achievements, the most important of which are: The complete exoneration of Roi Mutzafi of Fouad Ben Eliezer’s bribe charges. The Zvi Fishbach affair – an affair that earned the nickname “The Impossible Acquittal,” where three state witnesses testified against a man who was eventually acquitted. The firm is also known for winning 12 consecutive acquittals and creating many legal precedents. Murder and serious violence cases, drugs and sexual offenses that were acquitted and/or the case dismissed during a hearing. This includes the retrial of Yossi Davidov, a most rare procedure, who conviction for attempted murder was annulled. Over the past year, the firm also won two consecutive acquittals in the Supreme Court. The first was for Mordechai Regev who had been convicted of importing drugs and sentenced to five years and the second was for robbery in which the convicted man was sentenced to four and a half years prison. Both were acquitted in law.

As a senior and leading lawyer at the top of Israel’s legal world, Gez lectures before professional forums, conferences, and universities. He serves as a judge in mock trials and as a commentator on criminal legal affairs. He lectures before other lawyers, investigators, judges and jurists, army officers and security professionals, as well as the enforcement authorities: VAT, income tax and the Israeli police. Articles by Gez are published in the various media channels, and articles about him are frequently published in leading Israeli newspapers.

In 2001, Gez wrote the book “Criminal Law” published by Maskal Publishers, Yediot Ahronot. The 835-page book was written for jurists, lawyers, and the public, sets out criminal issues and is a practical guide to penal laws. The book received enthusiastic reviews from leading jurists in Israel and from senior lecturers and students. Reviews said that the book enriched Israel’s legal literature with its unique contribution, its professional and exhaustive approach, while being popular and worthwhile for everybody to read.

In 2007-2008, Gez won the Israel Press and Media Association’s Exemplary Lawyer Award for his struggle for justice in Israeli law. 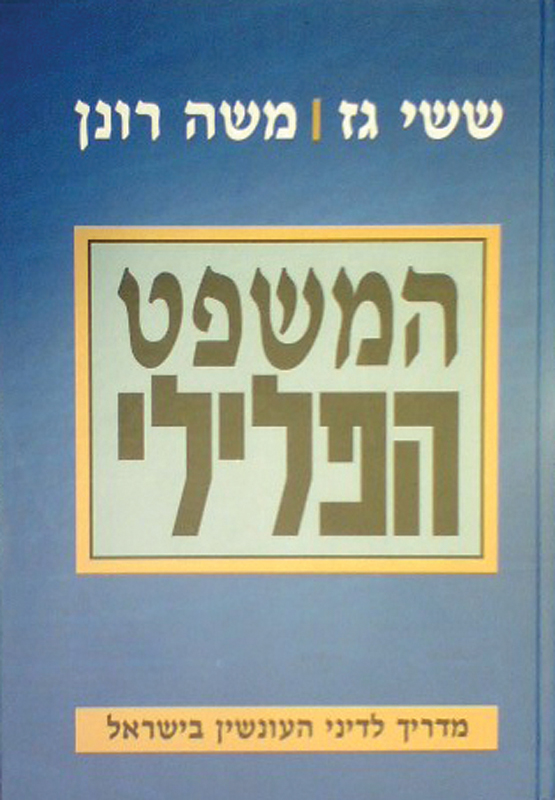