Main > articles > The Skyline and the New Towers

The Skyline and the New Towers 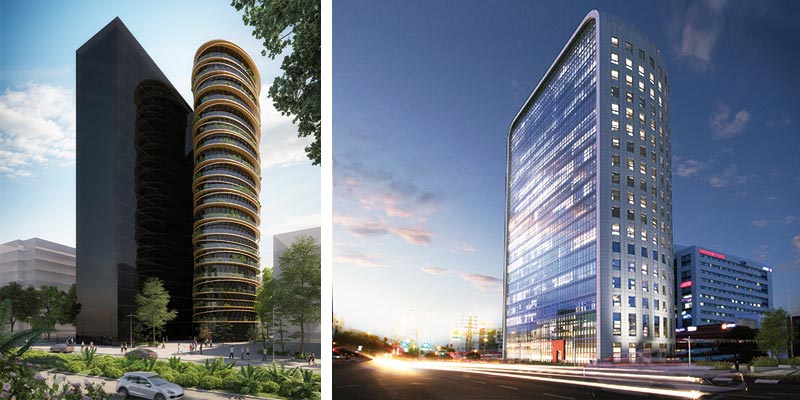 A few months ago, I hosted a friend who hadn’t visited Israel for about a decade. When we drove in the Ayalon Highway, he was obviously astonished. We, the natives, don’t notice how the new towers soar above us with dazzling speed. And that is not surprising. Israel’s land reserves are dwindling and the Israeli cities, particularly in the Gush Dan area, are springing up like mushrooms after the rain. The tower cities are here and they are happening now. Now is the time to design the cities’ skyline, to draw a colorful line that would become the hallmark of the Israeli metropolis.

This is no mean feat. A tower is a very complex animal, which is required to comply with a variety of constraints. First and foremost functionalism, or optimal fit for its users and residents – whether if this is a residential tower, a hotel or an office building – and some of them are required to handle all of them combined, in what is called “mixed-use”. The floors must be marketable – for rent or sale – or in real-estate terms, they must be efficient from the gross/net floor ratio aspect, enable maximal daylight exposure and provide the residents with sufficient planning flexibility. One mustn’t forget that the great majority of the towers are a result of entrepreneurial activity, and at the end of the day, the Excel’s bottom line of profit serves as the decisive factor in the tower’s planning decision-making process. The entrepreneur must also take into account,  in this set of considerations, the energy efficient, the speed and simplicity of the execution, the permits (double trouble) and other pivotal considerations and concerns.

The architectural result of the weighting of all these factors is usually a glass box. There is nothing wrong with a tall and slender glass box. To the contrary. One is beautiful, the other is stunning and even has stone cornices, the third is also great, but after dozens of glass boxes which can be found everywhere, the city – any city – would also like other towers. Towers with a sexy presence.

This isn’t an architectural whim at all. The tower’s visuality also has a brand-marketing effect, and especially an urban and cultural importance. The towers, with current construction technologies, would greatly outlast us, and this is a heavy responsibility. So that in order to create a tower that is a “landmark”, one must add passion to the architectural initiation and planning consideration, a passion that creates interest and tension between the pragmatic and the extrovert.

Through the descriptions and images of two new towers under “Auerbach Halevy Architects” planning, I shall demonstrate how we handled these issues. I believe that a metropolis’ skyline must be interesting and sexy. But this doesn’t mean “crazy” towers, but rather efficient structures with an unusual silhouette, which relate to their environment and accurately represent the city in which they were planted, the lives of this city’s residents, and the time period during which they were built.

This project, which is currently under construction, is a tower with office and commerce spaces for rent (a yielding property) that is initiated by YBOX ltd. The tower would include 18 above-ground floors, according to the building rights under a new zoning plan that is being promoted by the Tel Aviv Municipality.

The planning strategy had to handle several aspects: the building’s visibility along the Raul Wallenberg Road, The creation of a commercial piazza in the ground floor and mainly handling the height problem. Why was there a height problem? Because an 18-storey tower, with a typical floor that has an area of 1,200-1,400 sq. m., is too short and has “stubby” proportions!

Therefore, in order to generate architectural slenderness, we split the typical floor into two wings. The smaller wing was directed to the south, facing the traffic which flows into Ramat HaHayal with its elliptical shape emphasizing its height. This wind was designed as an extraordinary bracelet towers. The bracelets were formed through the projection of the concrete floor into beyond the window line and the planning floating steel beams that are harnessed to the building’s skeleton frame. The bracelets effect was achieved by covering these components with anodized aluminum sheets.

The larger northern wing was designed as a neutral backdrop for the bracelets tower. Its simple rectangular shape and its clean details don’t compete with the bracelets, rather emphasize them. This simplicity translates to competitive construction costs so that the project’s overall cost doesn’t exceed the costs of constructing modern office towers of a similar size – and the final product, which is highly distinguishable, is an 80-meter tall piece of jewelry.

The MetroMall Tower is built in Rehovot’s T.M.R. Park and soars to a height of 19 office floors above two commercial floors. The tower is the third out of five buildings that we are planning on Ogen Real-Estate land division. The complex includes a commercial center, a hotel and as mentioned above, office buildings.

The project’s strategic location is very important: at the edge of the T.M.R. Park, next to the Weizmann Institute, near the railway station and on the main transportation artery between Nes Ziona and Rehovot. These characteristics can be summed up in one word: Visibility. The MetroMall Tower is discernible from a great distance. This fact forced us to consider the design of this building as a “Landmark”.

The selected solution is a surprising combination between a simple and efficient floor and the processing of the technical roof floor, as to create the silhouette of a tall box that has been split in half. Its planning on the South-North axis enabled us to design an efficient north-facing screen wall, while the south-facing facade is covered with precast concrete elements with sunk and shaded windows.

The fact that the project relies on industrialized and modest details doesn't detract from its beauty. The Tower’s architectural cleanliness and unique silhouette relate both to the Weizmann Institute’s wondrous particle accelerator and to R&D buildings in the T.M.R. Park.