Advocacy & law office. Specialized in all aspects of civil and commercial law, providing personal and comprehensive service to clients through specialized divisions

The Balter Guth Aloni law firm was established in 1974 by Moshe Balter and Ehud Guth. Along the years, best-in-class jurists joined the firm, including Supreme and District Courts Judge Shaul Aloni and Dr. Meir Rosen, an expert in international law and among the drafters of the Camp David Agreements and the peace treaties between Israel and Egypt.

Over the past 50 years of practicing law, the firm is one of the largest and leading law offices in Israel. The firm employs over 100 attorneys in its staff, along with interns, administrative teams and advisers.

Firm Operations Worldwide:
The firm is a member of an international consortium of law offices, CONSULEGIS EEIG International Law Office Consortium, which has over 150 leading member offices worldwide.

Balter Guth Aloni and its founders, all of whom are practicing advocates with the firm, enjoy prominent status of being a legal icon in Israel and worldwide. The firm’s founders are among the leaders of Israel’s legal scene for the past 50 years and have taken a significant part in shaping Israeli law, concurrently with their far-reaching international activity.

The firm specializes in all aspects of commercial, corporate and economic law, and is regularly ranked and as a leader in its fields of practice.

The firm’s clients benefit from a unique combination of personal and comprehensive service alongside a professional advice according to international standards, business orientation and comprehensive perspective that allows for creative and innovative solutions.

Due to the firm’s size, combined with nationwide and worldwide coverage, we provide our clients with the best services in every legal and commercial field they require.

One of the firm’s most important values is contribution to the community. Its staff has been regularly volunteering for over 15 years in various schools, including “HABAD Ir Ganim” in Jerusalem and “Shorashim” school in South Tel Aviv, as part of a project by Another Lesson Association. 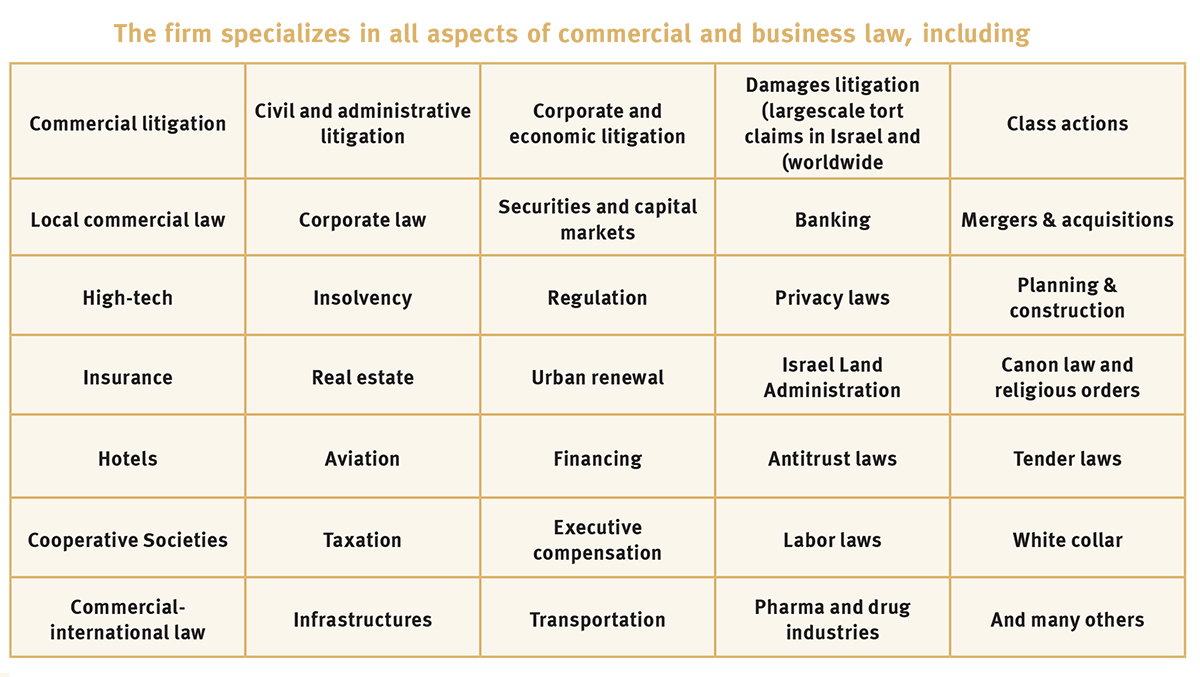